W. Jason Situ was born in Kaiping, China, where he was faced with the changes and challenges brought about by the country’s cultural revolution under Mao Tse Tung. His interest in art took hold, as he copied propaganda and slogan banners, before connecting with Szeto Lapa, who introduced him to plein air paint-ing and, later, with Mian Situ, who became his mentor. Eventually, Situ was able to study at the Guanzhou Academy of Fine Arts, where his style evolved into impressionistic realism. Fast forward to 1989. Situ left China and immigrated with his wife Lisa and their two children to the United States, where they made their home in Los Angeles, California. He worked at a warehouse and soon began to paint portraits and caricatures in his spare time, before earning a reputation as a talented landscapist, whose focus was—and still is—on light, color, and mood. “After I got to California, it was so exciting,” Situ says of the natural beauty of the area. By 1997, he was paint-ing full-time, enjoying the freedom to paint whatever he wanted whenever he wanted, wherever he wanted. 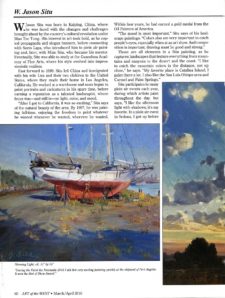