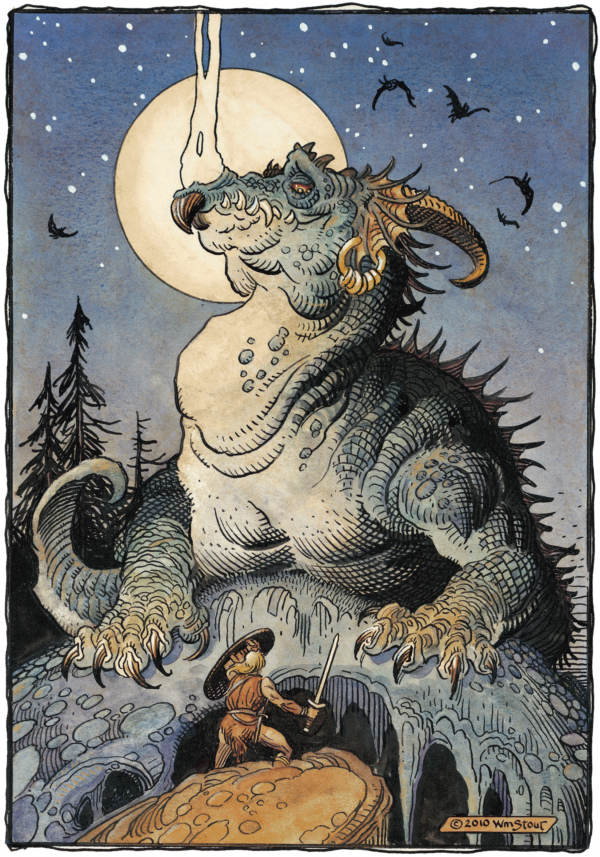 Description
Siegfried and Fafnir was painted by William Stout in 2010 as part of his Nordic Myths series. Stout is a famously diverse artist as well as internationally renowned in many fields, including comic books, entertainment and motion picture designs. William Stout was inspired by operatic cycle written by Richard Wagner after a special project created between California Art Club and Los Angeles Opera for Der Ring des Nibelungen Cycle.
According to legend, Siegfried’s foster father sent him on a daunting task to kill Fafnir, a poison blowing dragon. Siegfried hides below a cliff ready to attack, with his legendary sword Gram. Later as the creature lies there dying, Siegfried tells Fafnir that he will go back to the dragon's lair and take all his treasure. Fafnir warns Siegfried that all who possess the gold will be doomed to die. Siegfried replies that all men will die one day anyway, and that it is the dream of many men to be wealthy until their dying day. Thus he takes the gold without fear.
Bill Stout’s famous imagination is vivid in this painting - Farfnir is wearing an earring, his poisonous breath wreathed to the sky.