Painter Alexey Steele’s entry into the California Art Club’s recent 106th Gold Medal Exhibition was a portrait called “Ricky.” The three-quarter bust shows a raw-boned young man with a defiant upward gaze. His wind-blown chin whiskers bristle wildly from a resolute jaw, and the tattoo-covered sternocleidomastoid muscles erupt out of his shirt like a flesh-covered volcano. The hands and fingers of the defensively folded arms are also tattooed. This looks to be a feral character operating on society’s fringes. Were it not for his hooded sweatshirt proclaiming Carson, we might be looking at a harpooner from the Pequod or an eighteenth-century pirate in repose between rounds of pillage and plunder.

That would be the City of Carson, where Steele maintains his studio near the 110 Freeway, in a row of two-story, high-enclosed spaces that, from the outside, might be mistaken for movie sound stages. From the inside, his studio looks as though it could comfortably hold an airplane or two. This working class enclave is not a likely setting for an heir to the Russian academic painting legacy. 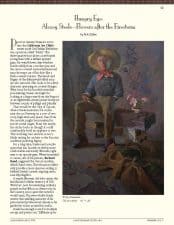