Contemporary artist Christopher L. Cook (b. 1991) experienced childhood in the diverse magnificence of the California coast and Arizona's desert when he began creating as a path of self-discovery. By following the enthusiasm of his inner child essence, Christopher has led a life rich with exploration and preserved his intrinsically artistic nature.

During high school his works of art in charcoal and ceramics were first publicly acknowledged and displayed prominently at the Chandler Center for the Arts. At that time, with close friends, he led a group of humanist guerrilla artists bringing poetry, theater, and visual arts to unsuspecting public spaces.

While at college pursuing psychology, his artistic passion was applied to oil painting as an elective under the teaching of J.D. Parrish. Further realizing the psychological and philosophical aspects of creative expression Christopher became enchanted by paint and wholly dedicated his time and intention to oil painting. Shortly after this affirmation, the philosophical teachings of artist Stefan Baumann and The Grand View Art Society captivated his imagination with possibilities. Stefan's mentorship brought Christopher's imaginative style outdoors developing his plein air skills.

Subsequent to joining the California Art Club (CAC) in 2012, he began apprenticing under the tutelage of artist David Gallup. Working with David in studio and in plein air has forever shaped his sense for color, design and harmony. By virtue of the continued mentorship of both Baumann and Gallup, and enhanced by his attentive personal observation, Christopher has experienced quantum leaps in his artistic development.

Currently a Mentor Program Member of CAC and an internationally collected artist, it is his intention to diligently practice lifelong creative virtuosity, and contribute his vision of inspiration, love, and impeccability which he believes the world can benefit from. 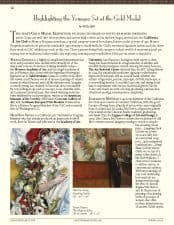 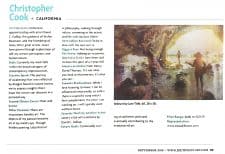 Art Education: Immersive apprenticeship with artist David C. Gallup, the guidance of Stefan Baumann, and the friendship of many other great artists. Also I have grown through exploration of self, …