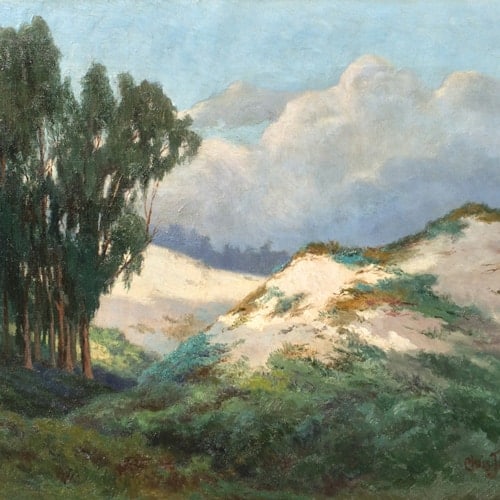 Christian A. Jorgensen (1860-1935)
Biography from the Archives of askART

Born in Oslo, Norway on Oct. 7, 1860, Christian Jorgensen moved to San Francisco with his mother in 1870.  He showed artistic promise at an early age, and when the School of Design opened in 1874, he was among the first to enroll. At 14 he was greatly influenced at that school by Virgil Williams, who was both teacher and father figure.  Jorgensen later became an instructor at the School of Design and served as assistant director from 1881-83.

He then established a studio at 131 Post Street in San Francisco where he continued teaching and by the mid-1880s he was a successful landscape painter. For five years he and his wife, Angela Ghirardelli (1858-1836), daughter of Domenico Ghirardelli, founder of the Ghirardelli Chocolate empire, traveled by horse and buggy to the sites of the 21 California missions and during this period he produced 80 watercolor studies of the missions and a complete set of oils. They had two children, Virgil Williams Jorgensen and Aimee Jorgensen Anderson.

In 1899 Jorgensen pitched a tent in Yosemite to create paintings of the area's majestic scenery, and after several months he obtained a permit to build a permanent studio-home. He continued painting in Yosemite during the warm months for the following 19 years. Jorgensen's home in Yosemite is presently used as headquarters for the U.S. Government Park Rangers. In 1905 Jorgensen built a home in Carmel made of local boulders, where he and Angela lived for a few years; which later became the Hotel La Playa most of his time was spent at the family home in Piedmont, California.