George Gallo is the writer/director of the three-time award winning movie, Local Color, the first film to portray modern-day artists dedicated to painting realistically. Gallo, a landscape artist himself, also painted all the canvases that appear in the movie, some 300 in total. Few creative souls have the range of talents that Gallo enjoys and fewer still would have the determination and savvy to conjure up a project that incorporates them all, but this is exactly what Gallo accomplished with this award-winning movie.

Originally from New York, Gallo moved to Los Angeles in 1982 with $800 in his pocket and a script he had written that after five years of persistence was produced as the movie, Wise Guys. Next came Midnight Run, a classic buddy/cops and robbers picture, with Robert De Niro and Charles Grodin in the starring roles. However, Gallo began his creative life as a painter and, alongside his successes in Hollywood, painting remains his passion to this day. 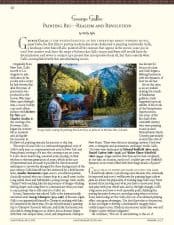