“The new work borrows some psychological themes, sometimes from classic stories. Some of these were previous ideas I revisited that I didn’t know how to approach at the time,” Gottlieb says. “The new painting Medea shows the moment the woman contemplates the decision to murder her children after Jason left her for Glauce. The new paintings capture something ‘between’ the punchlines. Take Michelangelo’s version of David versus Bernini’s depiction. One captures a moment of static glory, the other shows the action, hurling the stone that would kill Goliath. The subject of my paintings is about the state between action and un-action. Whether that thing is heroic, terrible or entirely mundane is an ambiguity I like.” 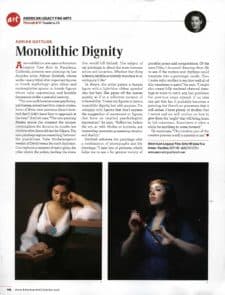