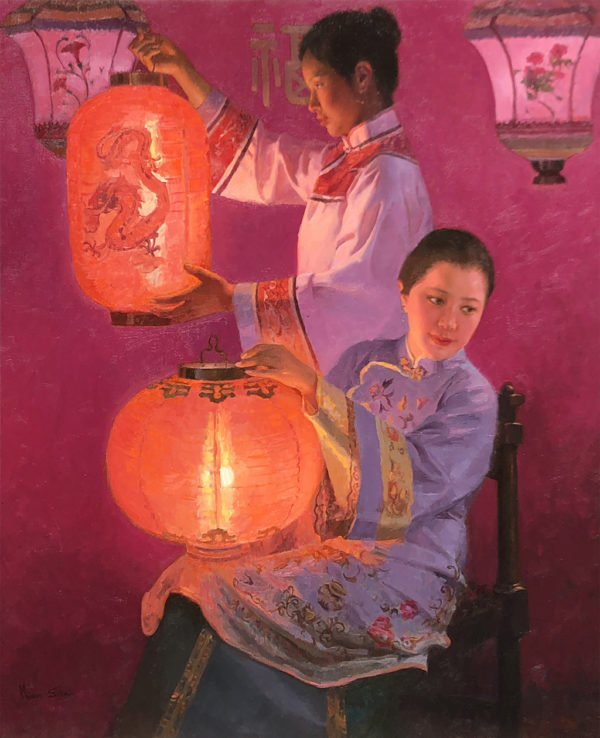 Description
Charged with uplifting energy, this oil painting by Mian Situ is brilliantly executed and appears to emanate its own light. The arrangement of bright magenta, orange and pink colors creates a sense of exuberance and airiness while the patch of blue anchors the composition. Based on the traditional Chinese dress, this scene appears to be set in the late 19th century. The glowing lanterns reflect off the young women's faces and silk tunics, and bring to mind John Singer Sargent's famous painting "Carnation, Lily, Lily, Rose."

Artist Statement
“Historians believe that the Chinese first began making lanterns during the Eastern Han Dynasty (25–220 AD). In China, people decorate their houses, streets and towns with red lanterns for festive occasions, such as Chinese New Year, Mid-Autumn Festival, and the Lantern Festival, also known as Yuan Xiao Festival, a holiday celebrated throughout Asia that honors deceased ancestors on the 15th day of the first month (Yuan) of the lunar calendar. Chinese lanterns are typically red in color and shaped as squares, rectangles, spheres and ovals and are embellished with red or golden tassels. Some even think of the Lantern Festival as a kind of Valentine's Day when young people are in hopes of finding the love of their lives.”
—Mian Situ