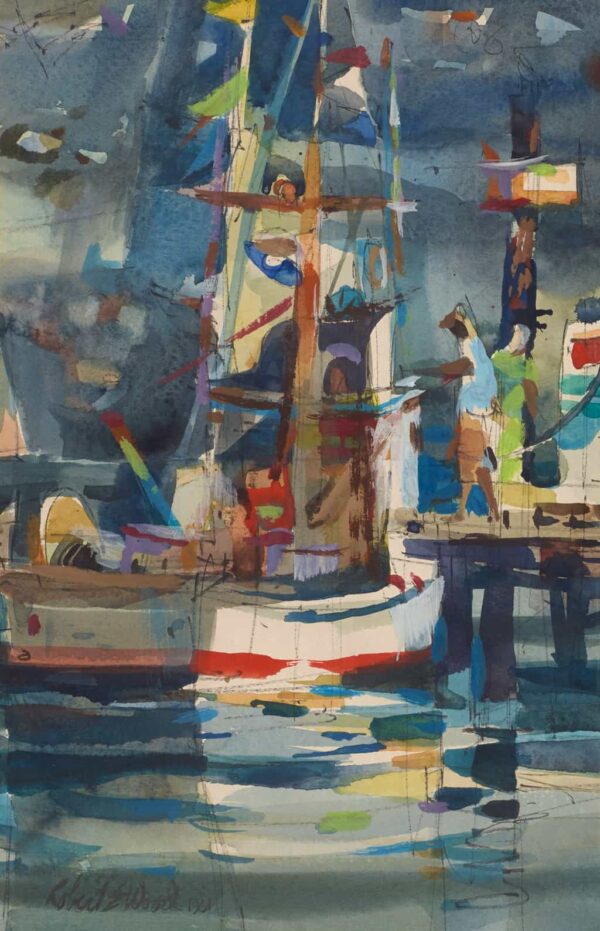 Description
This free-spirited watercolor painting exudes a festive feel with vibrant colors and broad, lively brushwork. The location is believed to be either Newport Beach or Corona del Mar.

Born in Gardena, California, Robert Earle Wood was one of the main practitioners of the "California Style" and is known for his watercolor landscapes and marine paintings in a semi-abstract approach. He earned a B.A. from Pomona College and an MFA from Claremont College where he studied with American Scene painters, Millard Sheets, Phil Dike, and Jean Ames.

Just after World War II, Robert E. Wood began seriously studying watercolor painting and was influenced by artists Rex Brandt and Phil Dike. By the late 1940s, Wood was in a graduate program and already exhibiting watercolors in museum and gallery shows. His works from this period often depict regional subjects found near Claremont, where he was attending college, and harbor subjects near Corona del Mar and Newport Beach.

By the early 1960s, he was acknowledged as one of the premier California watercolorists to emerge during the postwar era. The personal style for which be become well-known was clearly developing. While most of his works have been painted with transparent watercolors, he also freely incorporated opaque colors or other complimentary mediums, if he felt they improved a specific work of art. His paintings often balance areas of pure abstraction with stylized, but recognizable subject matter. Throughout his career, Wood divided his time between painting outdoors and working inside his studio.