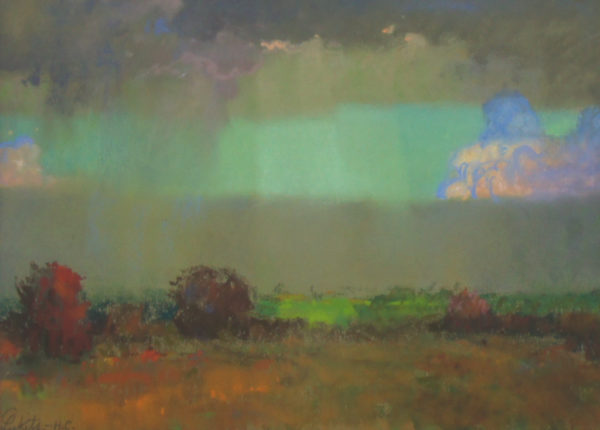 Description
Signed "Lukits - H.C." on the lower left. "H.C." is the French abbreviation for "Hors Concours", meaning the artist's work is recognized above contest, and therefore, not eligible to compete for prizes. The work was created en plein air when Lukits was exploring the southwest for two years (1922-24) after moving to California from Chicago.

Essay
Theodore Nikolai Lukits (1897-1992) is an artist as notable for the early 20th century legends who inspired him, as for the legacy of his own illustrious teaching career. Born in Transylvania, he immigrated with his parents to the United States and studied at the Chicago Academy of Fine Arts and the Art Institute of Chicago. A champion of the Beaux-Arts academic style, Lukits’ work also reflects the diverse influences of his instructors and mentors; among them Social Realists Robert Henri and George Bellows, William Victor Higgins of the Taos Ten, Czech Art Nouveau master Alphonse Mucha, and American Impressionist Karl Albert Buehr. It was Buehr, a member of the Giverny colony of ex-patriots studying under the tutelage of Claude Monet, who inspired Lukits to apply the science of color to capturing the transient beauty of light and atmosphere on the landscape.[show_more more="Read more" less="Read less" color="#760d10" list="»"]

Theodore N. Lukits (1897-1992): An Aesthetic Realist features the pastel plein air landscapes created by the artist on numerous sketching trips throughout the Southwest from 1923 through the 1970s. Following his move to California in 1922, Lukits became enamored of the rugged landscape and his prolific output of sketches showcases his mastery of the pastel medium that enabled him to depict luminous atmospheric conditions and brilliant light throughout the day. Dissatisfied with the limited spectrum of commercial pastels, Lukits learned to make his own pastels in the hues and values he desired. Informal, loosely executed, and largely untitled and undated, these sketches were never exhibited during the artist’s lifetime.  Nonetheless, they provide insight into his commitment to faithfully portray truth and beauty through work that aligns him ideologically with the 19th century Aesthetic Movement and the artist James Abbott McNeill Whistler. Lukits shared this aesthete's fascination with the Far East, as exemplified in his Orientalist still life Buddha and Tiffany Glass and the dramatic costume portrait Peking Opera.

Lukits infused his philosophical beliefs into a rigorous course of academic training at the Lukits Academy in Los Angeles that opened in early 1924 and continued until the artist’s retirement at age ninety. Over those sixty years, he mentored a new generation of plein air painters. Continuing the Lukits Legacy showcases the work of two of his most prominent students, California Art Club members Peter Adams and Tim Solliday. Peter Adams states, “Growing up in the latter half of the twentieth century, the era of abstract expressionism and relativism, my life radically changed when I met Theodore Lukits. His lifestyle, his working habits, and his philosophy of aesthetics opened my eyes to a new world rich in beauty, meaning, and purpose.”

We thank our partners American Legacy Fine Arts, Peter and Elaine Adams, Jonathan Art Foundation, and California Art Club for the loan of this work, and are indebted to the Los Angeles County Arts Commission and the Historical Collections Council of California Art for their generous support of this exhibition.