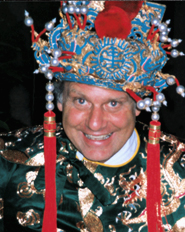 Contemporary American artist Peter Adams was born in Los Angeles on August 27, 1950. He received his training at Art Center College of Design, Otis Art Institute, and Instituto de Bellas Artes, San Miguel de Allende. However, it was at the Lukits Academy of Fine Arts in Los Angeles where he finally found the traditional artistic philosophies he so admired. At the Lukits Academy, Adams spent seven years in diligent formal training and as personal apprentice to the renowned mural, landscape and portrait painter Theodore N. Lukits (1897-1992).

From his years with Lukits, Adams gained a heightened appreciation for Oriental objects and antiquities. At the Lukits Academy it was typical for students to study still-life compositions that consisted of original sculptures and porcelains from the various Chinese dynasties that were part of the Lukits personal collection. This interest later led to his traveling throughout Asia, and in 1980 Adams was the first American artist to travel and paint unescorted through the People’s Republic of China. His fascination for Asia gained him great acclaim when, in 1987, he was the only American artist to travel and paint with the Mujahideen rebels in Soviet-occupied Afghanistan. Today, Adams combines Eastern design concepts with the Western sense of depth through atmosphere.

Since 1993 Adams has served as president of the prestigious California Art Club, which was established 1909 and is one of the largest and most active professional arts organizations in the country. Under his leadership, the Club’s roster has grown from 80 members to nearly 3,000 at present. Today, the California Art Club is recognized as a leading proponent in the current national traditional-realist art movement.

Adams is a Signature Member of the California Art Club, Pastel Society of America and Plein Air Painters of America, as well as a Master Signature Member of the Oil Painters of America. His commitment to community includes serving on the Board of Directors of the Pasadena Museum of California Art in Pasadena, California, and on the Advisory Board of Directors of the Academy of Art University in San Francisco. In addition, he was elected as an Associate Guild Member, Honorary Emeritus of the American Society of Classical Realism in Minneapolis, Minnesota.

In May of 1997 Peter Adams was the recipient of the Pasadena Gold Crown Award for Visual Art presented by the Pasadena Arts Council. Also in 1997, he co-founded the California Art Academy and Museum in Pasadena, California, a 501(c)(3) nonprofit institution designed to help launch a continuation of high standards in traditional fine arts. In 2007 the Autry National Center presented Peter Adams with the John J. Geraghty Award for the advancement of traditional fine art in the American West. Also in 2007, Adams received the Gold Medal for his 24 by 24 inch oil painting, “Prajnaparamita, Perfection of Wisdom,” voted the “Best Painting” by his artist peers at the California Art Club’s 96th Annual Gold Medal Juried Exhibition held at the Pasadena Museum of California Art. Additionally in 2007, Adams became the first artist commissioned by the historic Pasadena Tournament of Roses to create the “Pasadena Rose,” which was purchased by Citicorp Bank to help raise funds for children’s arts programs. In 2009, Adams won the Lifetime Achievement Award from Fine Art Connoisseur magazine at the California Art Club’s “98th Annual Gold Medal Juried Exhibition.” In winter 2009 the University of Southern California commissioned Peter Adams to paint the Fourteen Stations of The Cross for the new Our Savior Parrish and Caruso Catholic Center, which was completed in November 2012. In 2014, he and Elaine Adams were both granted with the Lifetime Achievement award from PleinAir Magazine.