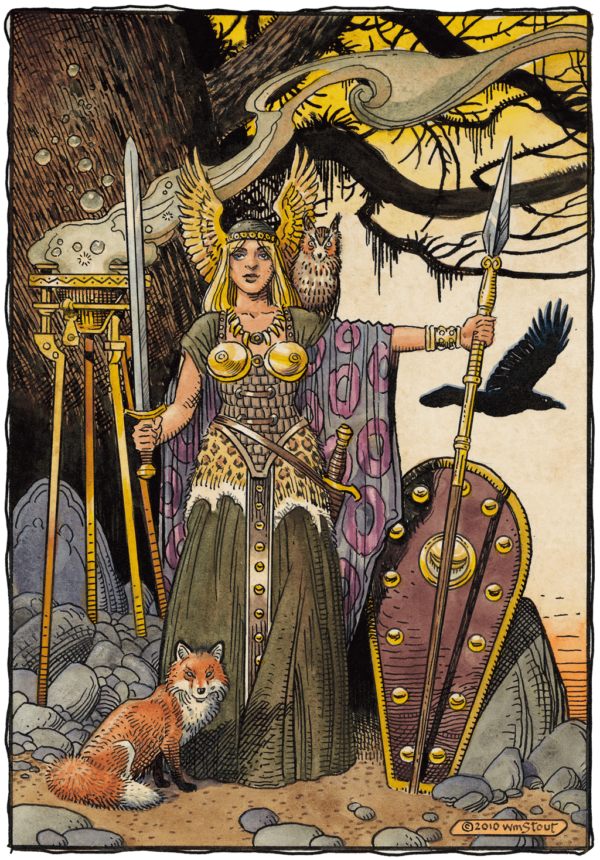 Description
William Stout is a multi-media artist who has won numerous awards for his artwork in pulp fiction, dioramas for natural museums, and film work, including two Conan movies, Indiana Jones, Raiders of the Lost Ark, and Pan's Labyrinth. Stout's painting, Brunhilde, represents a compilation of the artist's interests and was inspired by the 19th-century composer Richard Wagner's epic opera, The Ring of the Nibelung, as part of an art project with the Los Angeles Opera's 2010 performance of The Ring. The subject, Brunhilde, is based on Norse mythology from the Medieval Poetic Edda and represents the story of a beautiful warrior maiden, a Valkyrie, who was cruelly deceived by her lover. Her father, the supreme god Odin, punished Brunhilde for disobeying him and caused her to fall into everlasting sleep surrounded by a wall of fire. The hero, Siegfried, crossed through the flames and woke the maiden with a kiss. In Stout's version, Brunhilde is seen as a mighty Shieldmaiden and Valkyrie in the forest surrounded by spirit animals. The barred owl represents goddess Idun for protection; the raven represents the presence of Brunhilde's father, the supreme god Odin; and the red fox embodies the goddess Sigyn as a symbol of loyalty and compassion.

California Art Club Celebrates The Ring Cycle, in partnership with the Los Angeles Opera, exhibited at the Cathedral of Our Lady of the Angels, May 10 - July 16, 2010