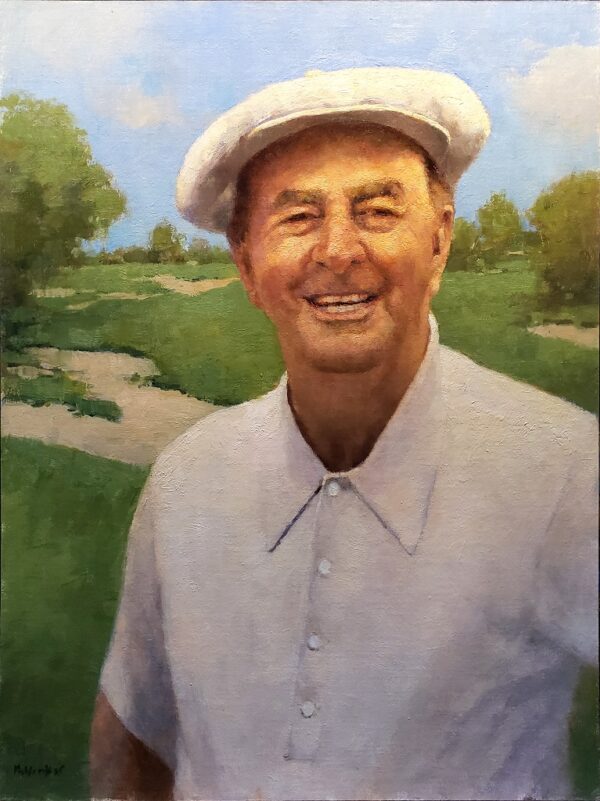 Portrait of George Fazio in the 1970s

The Subject
George Fazio (1912-1986) – born in Philadelphia, Pennsylvania, was a respected player in the mid-twentieth century and competed in seven Masters Tournaments from 1947 to 1954. His best finish was 14th in 1952.

Fazio won two PGA Tour events: the 1946 Canadian Open and the 1947 Bing Crosby Pro-Am (in a tie with Ed Furgol). He had career earnings of more than $50,000. He nearly won the 1950 U.S. Open at Merion Golf Club outside Philadelphia, finishing third to Ben Hogan and Lloyd Mangrum in an 18-hole playoff. This event was recently memorialized as one of the 15 most memorable Philadelphia sports moments. Like most golfers of his generation, Fazio earned his living primarily as a club pro during his regular career years. During the 1940s, he was head pro at Hillcrest Country Club in Los Angeles, where many of Hollywood's celebrities played.

In the 1960s and 1970s, Fazio became a leading golf architect. At the age of 57 he founded and designed Jupiter Hills Gold Club in Tequesta, Florida. His vision to run the club as a "pure golf club" earned him the moniker of the “benevolent dictator” of Jupiter Hills.

Fazio was well-regarded as a golf course architect and worked with his nephews Tom Fazio, Jim Fazio, and course designer Lou Cappelli. The foursome built many prominent courses, and they are particularly noted for the shapes built into their traps, such as clover-leafs and butterflies.

Fazio died in Jupiter, Florida at the age of 73.