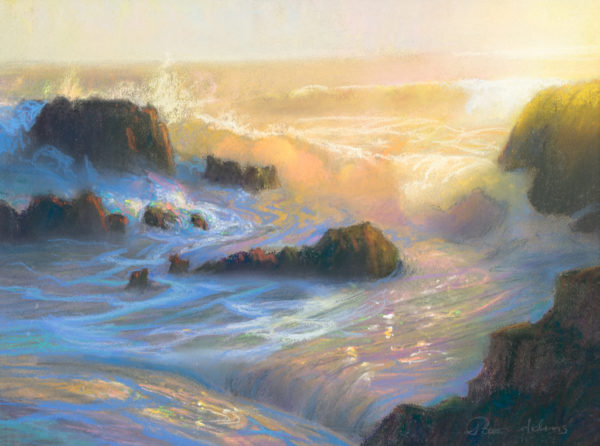 Description
If you look long enough at this dynamic plein air pastel by Peter Adams, titled Ephemeral Light, Leo Carrillo Beach, you can be easily lifted by the incoming wave into the sunlight. The scene instantly transports you to Malibu, one of the most picturesque places along the Pacific Coast.
The water sweeps over the rocks in a smooth but vigorous floating motion as they engage in a millennia-long private dialogue. The water here indeed holds a mystery. What makes the sea spray from crashing waves and shimmer with shades of blue, pink, purple and vibrant orange? Nature unveils its playful side as the setting sunlight reflects a blazing halo—and only the artist can interpret its mysteries.
Peter Adams, one of the most established California artists, is known for his robust full tonal range, and is particularly praised for his high key palette and intensity of colors. Adams uses his classical drawing and painting skills to capture the moment and to express his emotional response on canvas. As the artist explains, “I am particularly interested in unique lighting effects and how these effects reflect, refract, diffuse and obscure detail. It is more the ethereal quality of light that intrigues me.”
In Ephemeral Light Adams successfully captures a particular fleeting moment that is both powerful and soothing at the same time. He creates an effect that is similar to an operatic tenor’s High C that is both thrilling and lyrical, and in this painting brings out the most vivid character of the Pacific coast sunset.