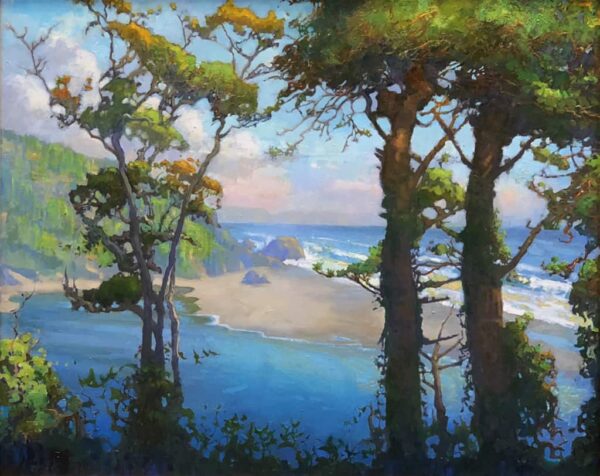 Artist Statement
"I love this scene because it has a feeling of adventure, surprise, and wonderment. It’s the feeling of trekking through a thick, overgrown forest and finally coming to an opening or clearing, and then, to one’s surprise, discovering a pristine river, a welcoming beach, and the glorious Pacific Ocean beyond. In short, it’s like discovering paradise."
— Peter Adams

Description
"Peter Adams found inspiration arriving at the mouth of the Klamath River, with its forests of giant coastal redwoods and pine, and stopped to paint this setting in his Klamath River Meets the Sea. Local Yurok Indians still fish here for delicious Chinook and king salmon, and steelhead trout, and it’s easy to imagine early explorers first coming upon this magical setting and the Pacific beyond."
— Molly Siple, Author, California Seascapes and Beach Towns, Published by Rizzoli International, New York, 2017

A detail of the painting was reproduced as a promotional banner at the entrance of the Autry Museum of the American West, January - February 2018