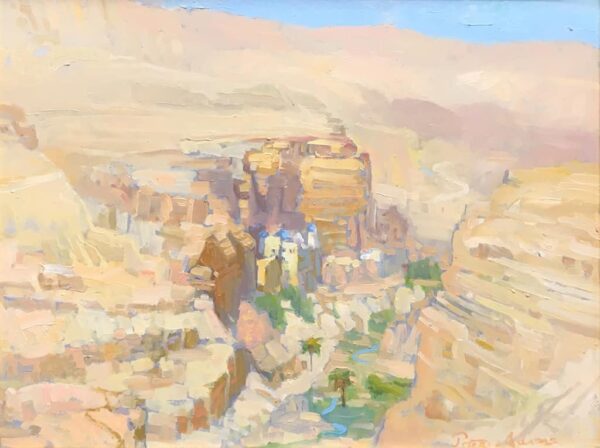 Artist Statement
"While traveling from Jerusalem to the Dead Sea, I came across this mesmerizing view of St. George’s Monastery, just a few miles off the main highway. This desolate area is located in one of the bleakest deserts I have ever experienced."

"St. George’s Monastery, which is nestled in the cliffs above the Kelt River, began in the 4th century A.D. with a few monks who sought the desert experiences of the Old Testament prophets as well as those of John the Baptist and Jesus. The monks believed that this was the location of the cave where Elijah was fed by ravens (1 Kings 17:5-6). The monastery continues to be inhabited by a few Greek Orthodox monks. The valley parallels the old Roman road to Jericho, which is believed to be the backdrop for the parable of the Good Samaritan (Luke 10:29-37)."

"I painted this scene to show the aridness and harshness of the Judean Desert—almost nothing grows there except by the little trickle of water that flows down to Jericho and to the Dead Sea. I was very intrigued by the isolation of this small monastery and the precarious and improbability of building such a structure in this location, particularly in the 4th century. The loneliness and tranquility of this place made me think about the opportunity of quiet contemplation and a closeness to God."
-Peter Adams