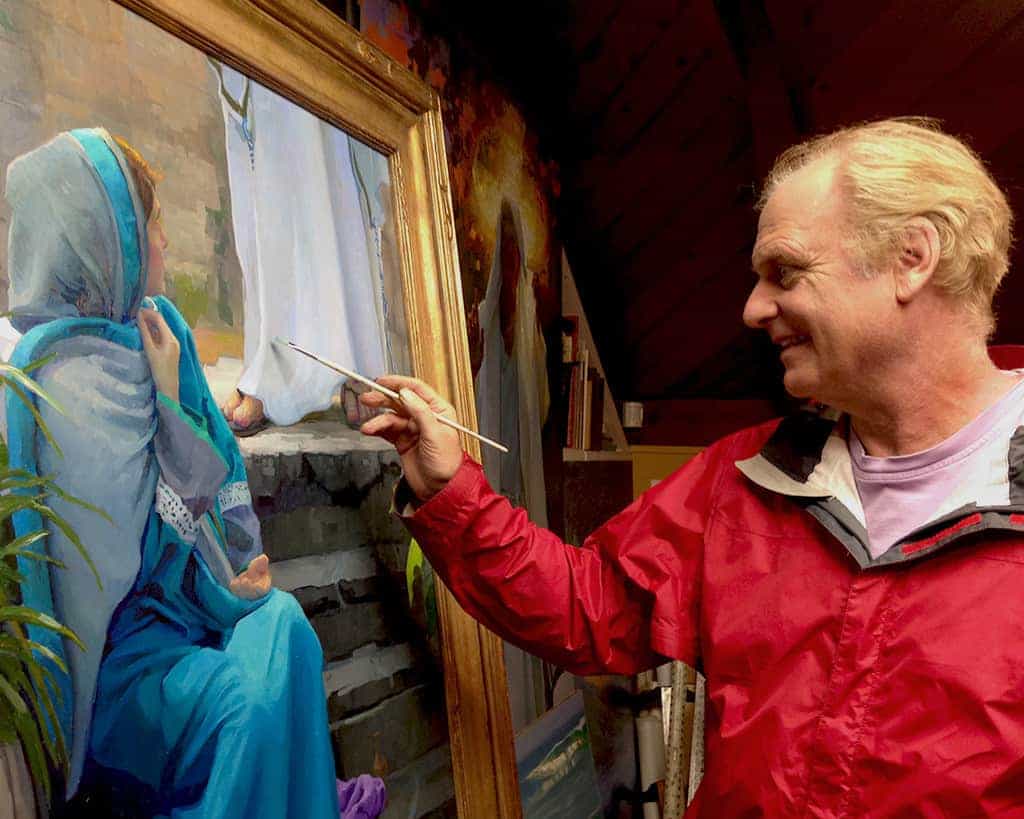 Contemporary American artist Peter Adams was born in Los Angeles on August 27, 1950. He received his training at Art Center College of Design, Otis Art Institute, Instituto de Bellas Artes, San Miguel de Allende, and at the Lukits Academy of Fine Arts in Los Angeles. At the Lukits Academy, Adams spent seven years, from 1970 to 1977, in diligent formal training, including four years as the personal apprentice to the renowned classical painter of murals, landscapes, and portraits, Theodore N. Lukits (1897-1992).

From his years with Lukits, studying still life compositions consisting of sculptures and porcelains from various Chinese dynasties that were part of the Lukits personal collection, Adams gained a heightened appreciation for Asian objets d'art and antiques. This interest later led to Adams traveling throughout Asia, and in 1981 he became the first American artist to travel and paint unescorted through the People’s Republic of China. His fascination for Asia gained him great acclaim when, in 1987, he was the only American artist to travel and paint with the Mujahideen rebels in Soviet-occupied Afghanistan. Today, Adams combines Eastern design concepts with the Western sense of depth through atmosphere.

Since 1993 Adams has served as president of the historic California Art Club, which was established in 1909 and is one of the largest and most active professional arts organizations in the country. Under his leadership, the Club’s roster has grown from 80 members to nearly 3,000 at present. Today, the California Art Club is recognized as a leading proponent of the current national realist art movement.

Commitment to the Arts Community

Peter Adams is listed in Wikipedia under “Peter Seitz Adams”

2010
University of Southern California Commission to paint the Fourteen Stations of the Cross for Our Savior Parrish and Caruso Catholic Center (completed, November 2012) 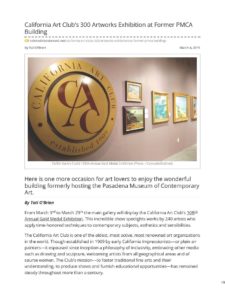 Here is one more occasion for art lovers to enjoy the wonderful building formerly hosting the Pasadena Museum of Contemporary Art. From March 3 to March 29 the main gallery … 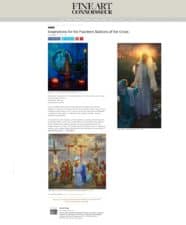 Peter Adams Featured in Art of the West, May/June 2017

Peter Adams admits to being somewhat of a rapscallion in his early years. When he was a junior, the military school he was attending instituted an art program. Unimpressed with …

“Among contemporary Impressionists, Californian Peter Adams ranks among the most accomplished. Whether working indoors or out, Adams emphasizes color effects and atmosphere rather than form and mass.”

“Peter Adams is one of California’s premier realist artists. He is also a romantic, who proudly continues a nineteenth-century ideal of painting as an expansion of our vision and emotions. Like Delacroix and Degas, masters of pastel, Adams uses the medium with astounding sensitivity. He prefers to work on location, so he is fully immersed in the scene. Typically he begins a pastel using broad sweeps of chalk. This initial lay-in of color is expansive, vibrant, and often resembles an abstract composition. As he continues to work, he defines features, capturing subtle nuances of form and tone. Peter likes to use his fingers in tandem with his chalks. Reserving one finger for each color group—red, green, yellow, blue—he gently rubs and works his pastels to create a dynamic range of effects. By building color and modulating edges, he is able to create the illusion of open air and solid mass, near and far, brilliant light and rich darks. Like the best romantic art, these pastels capture a scene but also transport you to a place that is wondrous and unforgettable.”

“In recent years, I have come to believe that the art appreciated by average citizens – not necessarily the avant-garde cognoscenti, but the art-loving public – is not to be discounted or dismissed in favor of whatever is hyped at the moment. Peter Adams… and many, many others, in this show and beyond are tremendously admired by art lovers today. They will be remembered and admired when many of those whose works grace the walls of contemporary museums and galleries have been relegated to footnotes or less in the art historical texts of the future.”


“Much of Peter’s art evinces inspiration of Oriental design: the distinct shapes of his trees reflect his training in bonsai, and his use of large aesthetic shapes to depict fog or cloud reflect similar uses of negative form in Oriental Painting.”

“Adams’ use of color is excellent, his compositions thoughtful and his brush strokes painterly in nature. He has his own unique approach to painting California mountains and the California coast… The end-results are pure Adams.”

“I am particularly interested in unique lighting effects and how these effects reflect, refract, diffuse and obscure detail.  It is the ethereal quality of light that intrigues me.  In painting natural or inanimate objects, I am constantly trying to discover and interpret interesting design, shapes, and color harmonies to stimulate the eye.  Elevating the human spirit and arousing a sense of discovery is what excites me as an artist.”

Peter Adams in his studio with works in progress.
Photo Credit: Brandon Kalpin

“Although I generally complete 90% of my plein air landscape paintings on location, it’s the last 10% that I do at my studio easel that I feel is my personal interpretation as an artist. The quiet time that I spend in my studio allows me the opportunity to contemplate the poetic essence of a subject. My object is not to focus on every detail of a scene, but to capture its spirit.” 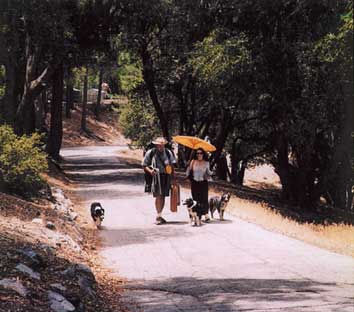 Peter and Elaine on a plein air painting excursion to Mt. Wilson with their dogs, from left to right, Panda, Jaipur and Smoochie.
Photo Credit: Lisa Cavelier

“The San Gabriel Mountains are just ten minutes from where we live in Pasadena. I feel so fortunate to be able to quickly get out of the city and into wilderness. All throughout these mountains, which peak at 10,000 feet, are countless points of interest, magnificent vistas, and an abundance of natural beauty. Hiking in the San Gabriels, I’ve come across all sorts of evidence of man’s productivity, including abandoned gold mines, neglected bridges, and remnants of what was once a grand funicular that led up to a fashionable lodge, hotel and, even a zoo. In this photo, we are on top of Mt. Wilson where one can find giant radio antennas and the Carnegie Observatories, including solar towers and a 100-inch telescope. Here, my wife Elaine and I are hiking our way up to Echo Rock from where I plan to do some painting of vast canyon vistas. Of course, our dogs are with us for encouragement.” 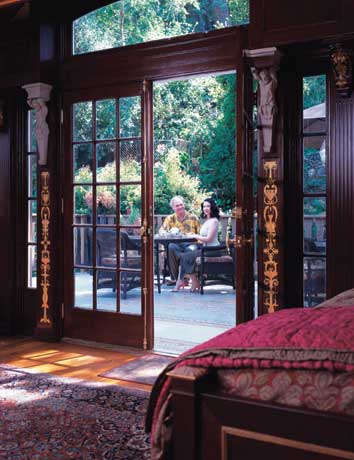 Elaine and Peter having tea on the studio deck.
© 2004 magnus stark/photography

“With our busy schedules, Elaine and I rarely have a chance to sit quietly alone just to chat. So, we set aside two hours each Wednesday when we can meet in solitude to review our calendar, discuss plans, and share ideas.”